Fentanyl is a synthetic opioid that was originally developed for severe pain management, as it is 50-100 times more potent than morphine. Illicitly manufactured substances like heroin and cocaine often contain fentanyl, which can lead to involuntary consumption, accidental overdoses, and death. In fact, DEA lab testing has shown that 4 out of every 5 pills laced with fentanyl contain a lethal dose (less than 0.007% of an ounce, or 2mg). This makes illicitly manufactured fentanyl a main driver of recent increases in synthetic opioid deaths (264% increase in synthetic opioid deaths in the United States from 2012-2015) (CDC, 2016).

Deaths due to Fentanyl overdose are on the rise. 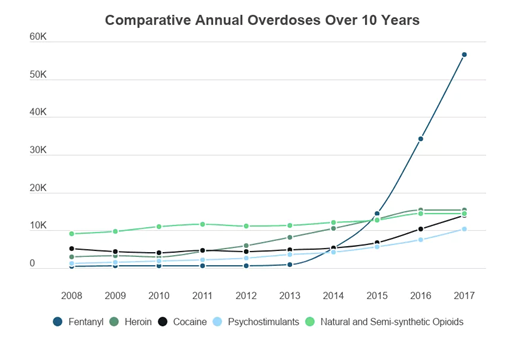 Based on the Coroner report for El Paso county in 2020, there were 186 total drug-related accidental deaths. Broken down further, 37 of those deaths were due to Fentanyl overdose, 4 were due to Fentanyl and Heroin combined, and 6 were caused by Fentanyl mixed with prescription opioids. In all, 85% of accidental opioid deaths in El Paso County in 2020 were caused by Heroin or Fentanyl

Why is Fentanyl so dangerous?

Fentanyl is often mixed into other substances, such as prescription medications like Xanax. This can be dangerous because individuals often consume fentanyl without knowing it or meaning to, which can result in accidental overdoses or death.

So remember: any pill or drug sold on the internet, on the streets or by a person you know could contain a potentially lethal dose of fentanyl.

Experts consider 2 mg of fentanyl to be lethal, but many counterfeit pills contain up to 5 mg (more than twice the lethal dose). Check out the image to the side for scale to see how small of an amount 2 mg of fentanyl truly is.

How to protect yourself against Fentanyl

Office of the Dean of Students (uccs.edu) 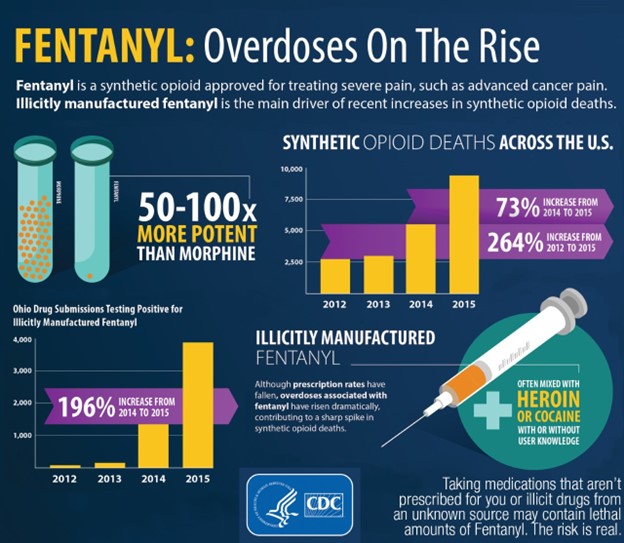